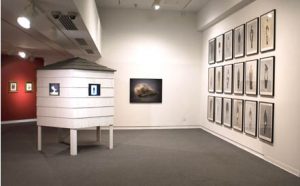 Brandon Ballengée
From Scales to Feathers: The Evanescent Presence of Sculpted Wings

In honor of Charles Darwin’s 200th birthday and the 150th anniversary, on Nov. 24, of the publication of On the Origin of Species, Lafayette College’s Williams Center Gallery and the Shrewsbury Museum, Shropshire, England, will present joint exhibitions of works by the environmental artist Brandon Ballengée this coming fall. A biologist and activist, Ballengée explores the boundaries between art and science, creating, for more than a decade, works about “bio-indicator” species, such as amphibians, fish, and birds.The exhibition comprises three related sections: A Habit of Deciding Influence: Pigeons from Charles Darwin’s Breeding Experiments; Frameworks of Absence: The Absent Birds of America: RIP; and Coop. 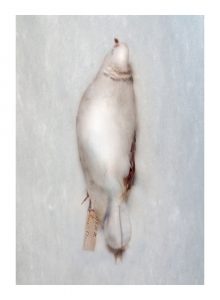 From Scales to Feathers:
A Habit of Deciding Influence: Pigeons from Charles Darwin’s Breeding Experiments

Charles Darwin enthusiastically took up the study of English pigeons in 1855, analyzing the results of artificial selection by observing fancier club birds, researching, collecting skins and skeletons of pigeons from England and abroad, and even breeding his own birds.  He bred them selectively in numerous experiments in an attempt to create variations of color, shape, size, and behavior, determining that all fancy pigeons had descended from the Columba livia, the common rock pigeon. This grasp of “artificial” selection was invaluable to his understanding of the way species change in natural environments. His observations about pigeons were made early in Origins, and expanded further in The Variation of Animals and Plants under Domestication, 1868. Darwin donated his collection of pigeon skeletons and skins to the Natural History Museum, London, in 1868. The collection is now housed at the Natural History Museum, Tring, Hertfordshire, England. For the photographic series A Habit of Deciding Influence: Pigeons from Charles Darwin’s Breeding Experiments, Ballengée, who was artist-in-residence at the Natural History Museum, London, photographed “bones” and “skins” from Darwin’s personal collection of specimens.  The photographs were printed nearly lifesize–the artist wished to “make the birds look alive yet frozen in ephemeral backgrounds resembling the naturally blurred intersections between art and science.” By using pigmented inks on watercolor paper, the photographs resemble 19th century paintings.

The photographs were printed printed in 2010 at the Media Lab, department of Art,  Lafayette College, by Lew Minter and Sydney Peyser ’10

Frameworks of Absence: The Absent Birds of America 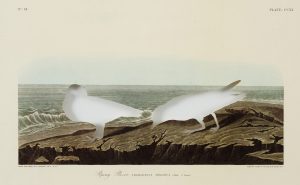 John James Audubon (1785-1851), French-American ornithologist, naturalist, hunter, and painter was an influence on Darwin, and careful observations of North American fauna are mentioned several times in On the Origin of Species. Audubon is best-known for his Birds of America volumes. Frameworks of Absence: The Absent Birds of America features birds, either declining or now extinct, including the passenger pigeon. Responding to species loss, Ballengée cut out the birds from original Audubon prints. Acquired over several years, he chose editions printed at that time in history when the species depicted became extinct. For instance, a 19th century hand-colored octavo once depicted a serene pair of Labrador ducks, a species last seen in 1875. This is what the artist now refers to as a “framework for absence.” 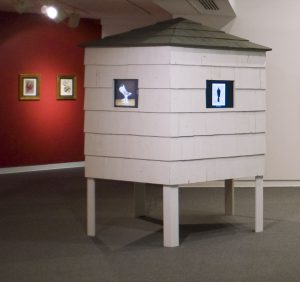 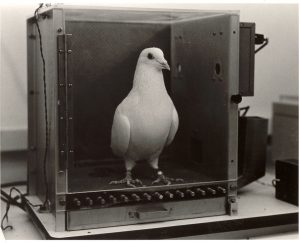 From Scales to Feathers: Coop

Also on view is Coop, a multimedia installation based on Darwin’s five-sided domestic pigeon loft. Through the “windows,” viewers will see photographs and videos of fancy, domestic, and feral pigeons submitted by the public via an international open call. The question the artist poses here is, “What is natural selection on a planet where humans have altered the entire environment?” 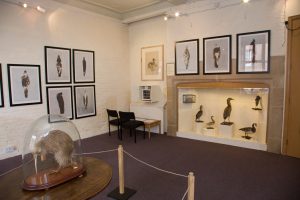 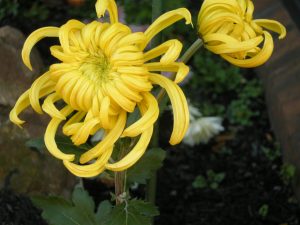 An Outdoor Installation of Cultivated Chrysanthemums

Williams Center Gallery and Lafayette’s Office of Plant Operations (Grounds) planted a sample of garden-hardy and exhibition chrysanthemums at the Williams Center. Modern ornamental mums are highly hybridized, and in this sense they are like the fancy pigeon breeds that Darwin studied. These flowering chrysanthemums have been created to exhibit a broad range of physical characteristics, often reflecting the preferences and styles of the period. The National Chrysanthemum Society has divided the flowers into 13 classes, defined by the way each bloom’s hundreds of disc (center) and ray (perimeter) florets are organized. Categories range from the small double pompons to brush and thistle, quill, spoon, and spider types, to the giant irregular incurves.

Cuttings for a portion of the chrysanthemum garden were generously provided by the Hunterdon N.J. branch of the National Chrysanthemum Society.

The notion that the very small and the very large look alike has a venerable tradition. Several pages in Leonardo da Vinci’s notebooks are devoted to the “universal law of matrices,” in which the artist observed a common ratio of parts to whole, in veins, bronchi, trees and tributaries.

Evolution is change. Over time, small changes can produce substantial change.  Darwin’s theory holds that all life is related and descended from a common beginning.  This profound insight, combined with the idea that from relatively simple interactions complex patterns and processes emerge, informs Liew and Kerns’ exploration of dynamic processes in visual structures.

The large works in the exhibition are the result of the collaboration between Liew and Kerns.  Using basic patterns such as branching or concentra, computational methods are used to explore how slight changes in the “rules of growth” influence the resulting visual structures. These forms are combined in layers of transparent surfaces that suggest shifting points in space and processes large and small defining  the structure of matter itself.  The multiple-layered works allow the viewer to see the evolutionary track back through the surface to the less complex visual systems from which the final image emerges.