Consider whether Jim Sanborn’s experiment might be capable of effecting positive change in an industry shadowed by illicit and destructive practices.

Jim Sanborn’s Looted? explores the trade in stolen and forged antiquities and is drawn from his early training as an archaeologist and, later, as an artist following the auction trade. Determining the authenticity and provenance of stone antiquities—such as highly prized eighth- to eleventh-century Khmer sculpture—is particularly difficult, resulting in a robust auction market for both stolen and forged objects. The artist’s intriguing proposal is to make what he describes as “high-end reproductions” or “contemporary antiquities” that are indistinguishable from genuine artifacts.

A selection of these “contemporary antiquities” will be displayed as if in an auction house preview, accompanied by enlargements of auction catalogue descriptions. Can these newly created works fulfill the desire of collectors and thereby stop theft and looting? Sanborn asks whether a more ethical kind of collecting can be fostered in the 21st century.

Additional information about Sanborn can be found here.

Kryptos, a sculpture installed in 1990 at the Central Intelligence Agency (C.I.A.) headquarters in Langley, Va., contains an 865-letter encrypted message. Three of the four sections have been deciphered by members of the public and cryptographers at the National Security Agency. The code in the fourth message has not yet been broken—even after Sanborn provided clues in 2010 and 2014. Recently, Sanborn released what he insists is a final clue as reported in the The New York Times (January 29, 2020) article “This Sculpture Holds a Decades-Old C.I.A. Mystery. And Now, Another Clue.” 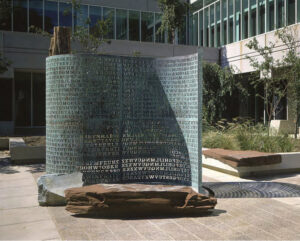 For Sanborn, science is not just used as the starting point, science has become an integral part of his artwork. In an illustrated lecture. He will review several such projects before discussing Looted?, the current exhibition in the Williams Center gallery

Kryptos, the sculpture installed in 1990 at the Central Intelligence Agency (C.I.A.) headquarters in Langley, Va., He will describe in detail Kryptos at the earlier noon-time talk.

Topographic Projection and Implied Geometry, created from 1995 to 1998, was a groundbreaking series of large-format light projections on the landscape in the western United States and Ireland. Some of the projections were two miles wide and 2,000 feet high. Widely embraced by the environmental art movement, the projections were photographed at night using long exposures with a camera positioned about a half-mile away.

Atomic Time, started in 1998, was a recreation of the 1944 Manhattan Project laboratory, the first nuclear weapons program at the Los Alamos Scientific Laboratory, where the first atomic bomb was built. The installation included original laboratory equipment, furniture and materials Sanborn was able to acquire.

Terrestrial Physics, 2010, is a reconstruction of the particle accelerator that, in 1939, spilt the nucleus of the uranium atom. Physicists Enrico Fermi, Neils Bohr, and Edward Teller were among the observers. Working from Carnegie Institution’s physicists’ original notes, drawings, and photographs, Sanborn reconstructed the machine and repeated the original experiment of splitting an atom of uranium.

Without Provenance, 2012 (retitled Looted? for Lafayette exhibit), was the first in a series of installations exploring the trade in stolen and forged antiquities and is drawn from Sanborn’s early training as an archaeologist and, later, as an artist following the auction trade. Determining the authenticity and provenance of stone antiquities—such as eighth- to eleventh-century Khmer sculpture—is particularly difficult, resulting in a very robust auction market for both stolen and forged objects.

about the artist:
Jim Sanborn graduated with a double major in art history and sociology from Randolph-Macon College, Ashland in 1969 and received his MFA from Pratt Institute, Brooklyn in 1971. His work is in the collections of the Hirshhorn Museum and Sculpture Garden, Washington, D.C.; MIT, Cambridge, MA; The Central Intelligence Agency, Langley, VA; The National Endowment For The Arts, Washington, D.C.; Kaohsiung Museum Of Fine Arts, Kaohsiung, Taiwan; and the Kawasaki International Peace Park, Kawasaki, Japan.