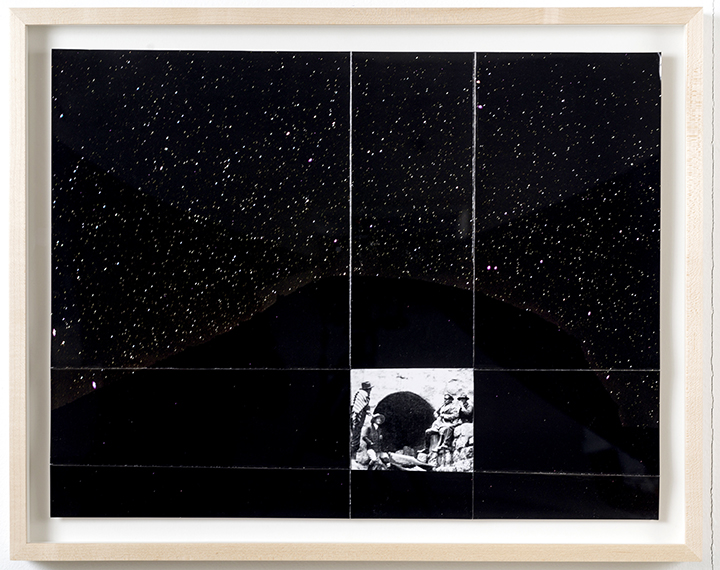 Karina Aguilera Skvirsky’s series The Railroad Workers curbs historic acclaim for John and Archer Harman’s Tren Ecuador (Ecuadorian Train), considered one of the world’s most dramatic railway achievements, which integrated the engineering talents of Jameson-Kelly, Gustav Eiffel, and Henry Davis. Chimborazo, Ecuador (night) champions the importance of the workers, indigenous Ecuadoreans and Jamaican migrants, by means of collaging them back into the landscape where they labored and died by the thousands.

Tren Ecuador’s administrators bought parcels of land alongside the train’s proposed route, thereby profiting twice. John Harman later died on site, and brother Archer died back in the U.S., falling off a horse named Ecuador. Skvirsky taps into Earth’s longer timetable, protectively embedding the anonymous laborers into map-like, rectangular folds of her midnight photo. The inset of happy workers and underbosses eating lunch is but a fraction of the whole piece. The original photo may have hoped to present grateful, willing labor joining concerned management for the benefit of all, but in Skvirsky’s hands the workers—powerful, nocturnal, diamond-studded—get the last laugh.

Part of Passing Bittersweet, a 2020 exhibition at the Williams Center Gallery. Find more of Karina Aguilera Skvirsky’s work on her website.