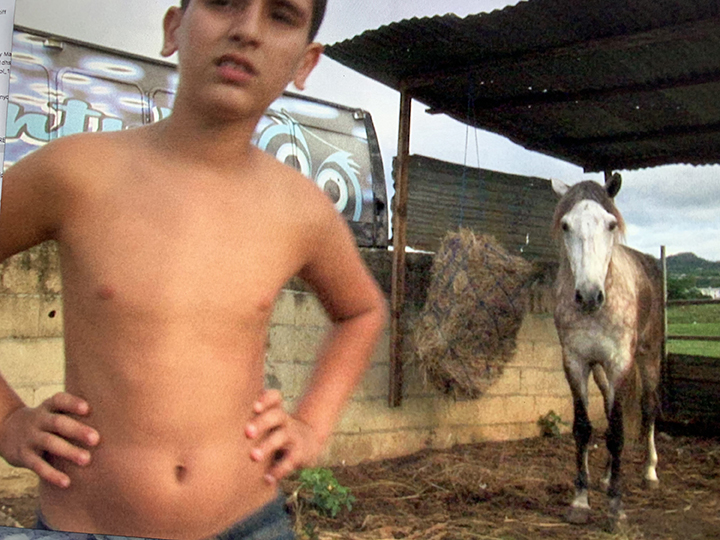 Ghen Zando-Dennis was shooting video for a team of United Nations trauma doctors in Puerto Rico after Hurricane Maria struck in 2017, when she noticed a horse under a mangled roof and stopped to film. A young boy appeared, eagerly offering a tour of what was left of the farm, and he introduced his horses: Samantha, Pepe, Morro, Tonka, and Huarache. The damaged buildings, the healthy animals, and the boy’s ease with them made a charged visual backdrop for their conversation. She asks him: “Like your horses, you went through Maria?” He nods a solemn yes, a painfully candid moment for the film, begging the question: is it better to mention the disaster or not? Later, after she learns his name and that he’s in school, he asks her name and where she is from, but—overcome with frustration—he cuts himself off: “You are going.”

Gustavo conveys the gravity of social contract, or cooperation for mutual benefit. Zando-Dennis is often faced with the dilemma of showing the realism of disaster or bringing aid. She would have liked to complete the transaction by returning to the location and sharing her film with Gustavo, but she did not see him again.

Part of Passing Bittersweet, a 2020 exhibition at the Williams Center Gallery. Find more of Ghen Zando-Dennis’ work on Vimeo.