Jennie A. BROWNSCOMBE, Washington Greeting Lafayette at Mount Vernon, in 1784 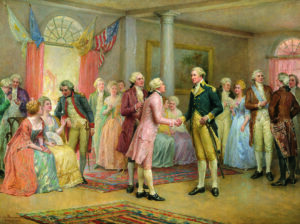 Commemorating the 1784 visit of the Marquis de Lafayette to Mount Vernon, Jennie A. Brownscombe’s painting depicts the last occasion on which the Lafayette, the French “hero of two worlds” and George Washington would meet. Typical of the Colonial Revival imagery, the painting shows major historical characters as they take part in what appears to be a typical social welcoming ceremony.

One of America’s few successful female American history painters, Pennsylvania artist Brownscombe studied at the National Academy of Design and, subsequently, in Paris. She began her career producing still lifes, portraits, and genre paintings; beginning in the 1870s, several were exhibited at the National Academy of Design. In the late 1890s, her attention turned to the painting of sentimentalized historical subjects typical of the Colonial Revival focus on nostalgia, rather than war scenes and battles. Other examples include The First Thanksgiving at Plymouth (1914, Pilgrim Hall Museum, Plymouth, Massachusetts), and Washington Bidding Farewell to his Soldiers at Frances Tavern, also in the Lafayette College Art Collection.