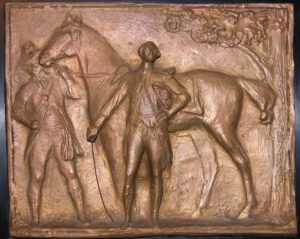 In the late 1800s and early 1900s, Daniel Chester French was one of America’s foremost sculptors. Working with prominent architects such as Charles McKim, Cass Gilbert, and Henry Bacon, French sculpted several important public monuments including the seated Abraham Lincoln in the Lincoln Memorial, Washington, D.C.

This bronze sketch represents the charismatic Marquis de Lafayette (1757–1834), who led French troops in support of the American Revolution.

French sculpted Lafayette as part of a commission for a monument in Prospect Park, Brooklyn, New York. Unveiled in 1917, the bronze relief was set in a granite stele designed by Henry Bacon. The composition was based on an engraving of Lafayette at the Siege of Yorktown, 1781 attributed to Noel Le Mire after a painting by Jean-Baptiste Louis Le Paon, and a second by H.B. Hall based on Le Mire’s print published in Washington Irving’s Life of Washington (1859). Le Paon’s original painting, Lafayette at Yorktown is in the College’s art collection and several copies of the Le Mire print are held in the College’s Special Collections.[1]