Charles Darwin enthusiastically took up the study of English pigeons in 1855, analyzing the results of artificial selection by observing fancier club birds, researching, collecting skins and skeletons of pigeons from England and abroad, and even breeding his own birds.  He bred them selectively in numerous experiments in an attempt to create variations of color, shape, size, and behavior, determining that all fancy pigeons had descended from the Columba livia, the common rock pigeon. This grasp of “artificial” selection was invaluable to his understanding of the way species change in natural environments. His observations about pigeons were made early in Origins, and expanded further in The Variation of Animals and Plants under Domestication, 1868. 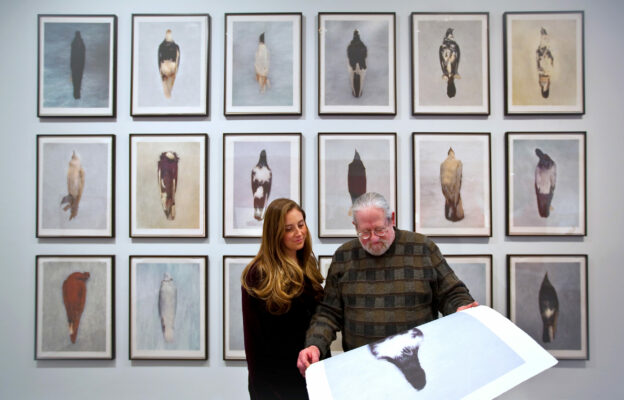 Professor of Art Lewis Minter with Art Studio Major Sydney Peyser ’10 in the Williams Center Gallery. They printed photographs for Brandon Ballengee. From Scales to Feathers: The Evanescent Presence of Sculpted Wings. The exhibition marked the 150th anniversary, on November 24, of the publication of Charles Darwin’s On the Origin of Species,” and was comprised of three related sections. In “A Habit of Deciding Influence” were 18 photographs of Darwin’s pigeon specimens at the Natural History of London/Tring. Darwin took up the study of domesticated pigeons in 1855 and his observations of artificial selection in pigeon breeding was invaluable to his understanding of the way species change in natural environments. 2)”Coop” is a mixed-media installation based on Darwin’s five-sided pigeon coop. 3)”Frameworks of Absence: The Extinct Birds of John James Audubon includes 10 altered prints from “Birds of America.