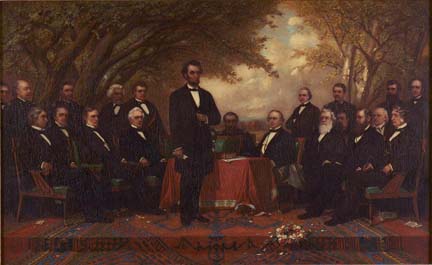 “Fourscore and seven years ago our fathers brought forth upon this continent a new nation, conceived in liberty and dedicated to the proposition that all men are created equal. Now we are engaged in a great civil war, testing whether that nation, or any nation so conceived and so dedicated, can long endure. We are met on a great battlefield of that war. We are met to dedicate a portion of it as a final resting-place for those who here gave their lives that that nation might live. It is altogether fitting and proper that we should do this. But in a larger sense we cannot dedicate, we cannot consecrate, we cannot hallow this ground. The brave men, living and dead, who struggled here have consecrated it far above our power to add or detract. The world will little note nor long remember what we say here, but it can never forget what they did here. It is for us, the living, rather to be dedicated here to the unfinished work that they have thus so far nobly carried on. It is rather for us to be here dedicated to the great task remaining before us, that from these honored dead we take increased devotion to that cause for which they here gave the last full measure of devotion; that we here highly resolve that the dead shall not have died in vain; that the Nation shall under God have a new birth of freedom; and that government of the people, by the people and for the people, shall not perish from the earth.”

This original study for Bicknell’s panoramic painting in the Malden Public Library, in Massachusetts, depictss President Abraham Lincoln’s delivery of his famous Gettysburg Address at the dedication of the National Cemetery, in Gettysburg, Pennsylvania, on November 19, 1863. Although painters and printmakers paid almost no attention to the event and speech during the remainder of the Civil War, by the mid-1870s, as it became part of numerous centennial observances, artistic interest began to increase. For this solemn work, Bicknell assembled an entourage of 20 important Union leaders, including military men, politicians, and the African-American abolitionist Frederick Douglass, who, among others pictured, did not actually attend the ceremony. The painting is, therefore, a symbolic representation of Northern and antislavery unity.

Born in Maine, Albion Harris Bicknell studied in Boston and in Paris, under Thomas Couture, before opening a studio in Malden, Massachusetts. In addition to landscapes and history paintings, he became particularly well known for his use of the monotype printmaking process.