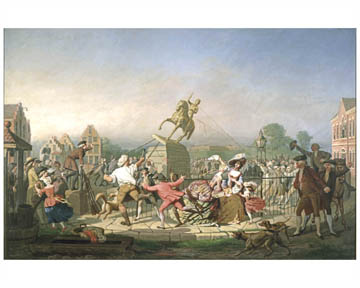 The statue of King George III by British sculptor Joseph Wilton was dedicated August 16, 1770, at Bowling Green, at the southern tip of Manhattan.

William Walcutt’s 1857 painting depicts the destruction of the monument by New Yorkers and George Washington’s troops following a public reading of the Declaration of Independence on July 9, 1776.

On the evening of July 9, 1776, after news reached New York of the approval by the Second Continental Congress of the Declaration of Independence, a mob toppled the statue of the British king George III in an act of “symbolic regicide.” According to legend, the pieces of the statue were then sent to Connecticut, where they were melted down and made into 40,000 bullets for the Continental Army. The nationalism inherent in this incident was of great interest to mid-19th-century, pre-Civil War artists, including Walcutt, whose depictions of events related to the 18th-century establishment of the Union served as encouragement in the mid-19th century for its salvation.

A native of Columbus, Ohio, William W. Walcutt (1819-1882) studied painting and sculpture in New York and in Europe. In addition to his success as a history painter, he is known for his lifesized marble statue of Commodore Oliver Hazard Perry, which was commissioned to commemorate Perry’s decisive victory at the September 10, 1813, Battle of Lake Erie, during the War of 1812. It was originally installed in Cleveland, Ohio, in 1860.