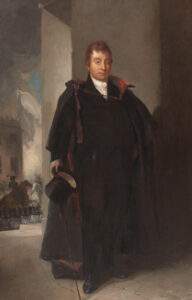 At the invitation of Congress, Marie-Joseph-Paul-Yves-Roch-Gilbert du Motier, Marquis de La Fayette, returned to America in 1824 for a farewell tour. The French hero of the American Revolution spent thirteen months journeying through America’s twenty-four states. At every stop, cities, towns and battlefields feted the nation’s guest with parades, ceremonies, receptions, balls, banquets, illuminations and transparencies. This tour featuring an icon of the Revolution inspired patriotism, unification, outpourings of affection, and souvenirs. The General’s hosts commissioned portraits of their hero. The City of Philadelphia created a Committee of Arrangements to orchestrate befitting recognition. Following an extravagant reception at Independence Hall on September 8, 1824, city leaders asked Lafayette’s permission for artist Thomas Sully to create a record of the memorable day. So demanding was the General’s itinerary that the artist followed Lafayette to Washington where he made this small oil study. Back in Philadelphia, Sully painted the full sized oil portrait, completing his assignment in 1826.

Sully, noted for his romantic, flattering style, was an excellent choice. In the jubilee year of the First Continental Congress, Lafayette was sixty-seven years old when he made his arduous journey. He was a living link to the Revolution but his compatriots were dwindling. By portraying the legendary General as a far younger, more virile man, Sully makes the aged warrior timeless.

In the study, Lafayette stands on the north apron of Independence Square before a pillar of an arch, designed by architect William Strickland after the triumphal arch of Septimus Severus in the Roman Forum. The prop was covered with allegorical figures and statues which Sully recorded in a pen and wash sketch, but which he eliminated from the study and final portrait, calling attention instead to his subject. Through the arch, the viewer sees Lafayette’s admirers crowding the windows and roof of Independence Hall.  Flags billow from poles along the balustrade while mounted and standing members of one of his escort troops, the Washington Grays, are in the mid ground.

Wearing a black suit with white shirt and collar and a black cape lined in red satin held loosely in place by red and gold tassels, Lafayette gazes into the distance, not at the viewer. Sully has given the Marquis a neo-classical oval face and his toupee of close-cropped hair a reddish cast. His proper left arm beneath the cape is akimbo adding mass and strength to his body and his gloved hand holds his right glove that he removed to hold a top hat and cane. The Marquis’ face is unlined, belying the effects of time and gravity.

Sully portrays Lafayette not as he appeared on that September day, but as he might appear in Elysium with his fellow warriors.

The many places Americans named in Lafayette’s honor– towns, streets, parks and even colleges–document the grand tour. To the end a proponent of revolution and an opponent of the slave trade, Lafayette, the survivor of two revolutions, is all but forgotten in France; but Americans still remember him with fondness and gratitude.[1]