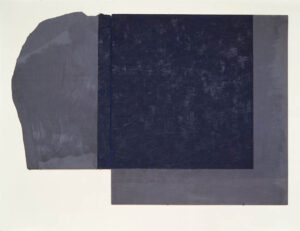 Originally from the Pacific Northwest, Merrill Wagner (b. 1935) moved to New York in the late 1950s after graduating from Sarah Lawrence College. In the early 1960s, she worked in geometric abstraction using canvases, hard edges and bright contrasting colors. In the late 1960s, inspired by Eva Hesse, she started to experiment with different materials. She explored textures, patterns and the ways different media would sit on top of or repel one another. This experimentation would prove to be an ongoing fascination.

By the 1980s, Wagner was painting on stone, steel and slate, focusing on the surface of the material, the geometric patterns inherent within it, and ordering the painting around its individual marks, blemishes and colors. For Wagner, these enormous paintings represented those things within the landscape that cannot be changed—the ocean, the desert, or the night sky. As Roger Boyce noted in an Art in America review, “The material gravity and anonymous esthetic of the industrially manufactured [materials] stand in for the assertive indifference and receptive sublimity of nature.”