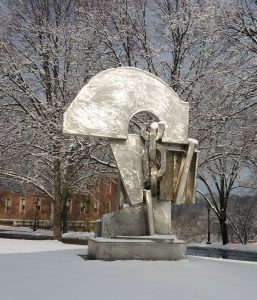 Made of stainless steel, it stands 16 feet tall and weighs about four tons. The sculpture was installed Sept. 11, 2008 along High Street, near Skillman Library. Dedication ceremonies were held Sept. 27.

The project was proposed by Curlee Raven Holton, professor of art and founding director of the College’s Experimental Printmaking Institute, EPI, with which Edwards has collaborated before. He served as artist-in-residence at EPI in 2004-05, supported by the David L. Temple Sr. and Helen J. Temple Visiting Lecture Series Fund. The sculpture is “abstract and symbolic, massive and upward-reaching, representing struggle and tension and achievement,” Holton said. He has created a print whose sales will support a scholarship in Edwards’ name that will benefit students interested in graphic art.