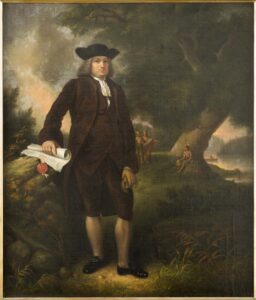 In December 1832 the Society for the Commemoration of the Landing of William Penn presented a full-length portrait of Pennsylvania’s proprietor to the City of Philadelphia in celebration of the 150th anniversary of the founder’s arrival. Henry Inman’s conjectural portrait depicts an historical legend about Penn. The painting also explores deeper themes of the Society of Friends’ 1827 separation, and colonial mistreatment of indigenous peoples. Inman’s small painting in the Kirby collection is a color study for the completed presentation work now exhibited in Independence National Historical Park in Philadelphia.

Inman’s work features three essential elements of the historical legend: William Penn, a large elm tree and native peoples. Local antiquarians would recognize the popular belief that the colony’s founder negotiated a treaty with indigenous peoples beneath an elm tree at Shackamaxon, a point on the Delaware River north of Philadelphia. Inman’s conjectural portrait of the proprietor references Benjamin West’s painting, Penn’s Treaty with the Indians (1771) known by its widely disseminated print form.

Penn Society members Roberts Vaux and John Fanning Watson questioned the accuracy of the scene that West depicted and they conducted historical research to verify the treaty story. Their quest didn’t yield satisfactory validation, but their correspondence shows concern about the equity of the land exchanges in the treaties they discovered. Their conclusions influenced Inman.

Unlike the colloquy among the English and the native peoples depicted in West’s composition, Inman’s Penn neither engages with the natives nor stands beneath the elm.  Both elements are behind the founder, visible to the viewer but not to Penn whose right hand rests on the proprietary charter with its seal. The elm whose existence was often cited as verification of the treaty, blew down in 1810.  Only relic objects made of its wood remained.  Inman relegated the once flourishing elm with three native men beneath it and a fourth canoeing on the Delaware to the background of his painting.  Penn’s utopian vision was in the past.

Many members of the Penn Society were Quakers and they may have viewed this portrait of Penn as a call to harmony within the Religious Society of Friends who were riven by opposing theologies in 1827. Friend Roberts Vaux had unsuccessfully appealed for unification. Displayed in a public place, Inman’s portrait of William Penn—the closest portrayal of an icon that Quakers would allow—served as a reminder to all Friends of the pacific motives of Pennsylvania’s proprietor.

While Henry Inman was preparing this painting in 1830–1831, President Andrew Jackson signed the Indian Removal Act forcibly relocating indigenous people to western lands. Vaux, who refused a place in Jackson’s cabinet, felt the federal policy was dealing a second blow to the natives, the first being the many suspect treaties made by Penn’s agents and descendants during colonial settlement.

The Penn Society portrait commission proved profitable for Henry Inman. The young artist took likenesses of several members of the Society including that of Vaux. Later, artist John Sartain painted a grisaille version of the Inman as a guide for his creation of the mezzotint plate used in the engraved version of the Penn portrait.   James Earle published the print popularizing Inman’s work. [1]