In my art, I wish to present myself through multiple lenses—as artist, as Moroccan, as traditionalist, as Liberal, as Muslim. In short, I invite the viewer to resist stereotypes. — Lalla Essaydi

Photographer Lalla Essaydi‘s  explorations of the image of woman in Islamic society address the complex reality of Arab female identity from the unique perspective of personal experience.

Essaydi’s art champions women. Central to the artist’s vision is a unique synthesis of personal and historical catalysts. As a Muslim woman who grew up in Morocco, raised her family in Saudi Arabia, and relocated to France and finally the United States, the artist has profound firsthand perspectives into cross-cultural identity politics. Essaydi also weaves together a rich roster of culturally embedded materials and practices—including the odalisque form, Arabic calligraphy, henna, textiles, and bullets—to illuminate the narratives that have been associated with Muslim women throughout time and across cultures. By placing Orientalist fantasies of Arab women and Western stereotypes in dialogue with lived realities, Essaydi presents identity as the culmination of these legacies, yet something that also expands beyond culture, iconography, and stereotypes.

An illustrated catalogue with essay by Valerie Behiery is available.  Behiery is a Canadian independent scholar and arts writer whose research focuses on historical and contemporary visual culture from or relating to the Middle East, with a special emphasis on gender, cross-culturality, and the politics of representation. The catalogue was coproduced with the Trout Gallery, Dickinson College.

Public lecture by the artist, ” Gender, Power, and Tradition,” February 28, Oechsle Hall, 4:10 p.m., followed by a reception for the artist at the Williams Center.

The exhibition is presented in conjunction with the first year summer read, Laila Lalami’s Hope and Other Dangerous Pursuits. Lalami gave a keynote address on March 21. 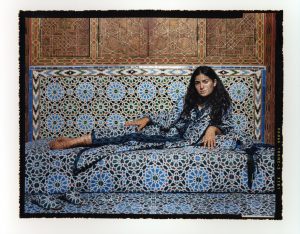 Lalla Essaydi’s lecture and residency are funded in part by the Association of Performing Arts Professionals’ Building Bridges: Arts, Culture and Identity, a component of the Doris Duke Charitable Foundation and Doris Duke Foundation for Islamic Art; College programs and departments including Africana Studies, Women and Gender Studies, Anthropology and Sociology, History, the Department of Arts’ Richard A. and Rissa W. Grossman  and the Lafayette Art Galleries. The Lafayette Art Galleries and Collections receives state arts funding support through a grant from the Pennsylvania Council on the Arts, a state agency funded by the Commonwealth of Pennsylvania and the National Endowment for the Arts, a federal agency.