The 35mm slide was once a powerful recorders of art, memory, and time. 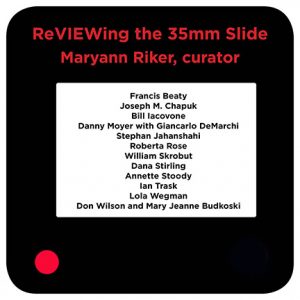 From the family vacation slideshow to the art history presentation, slides were prevalent records of culture once, but have passed out of common usage in the digital age. Kodak stopped making its signature Kodachrome64 slide film in 2009; discontinued the Ektachrome line between 2009 and 2013; and slide projectors in 2004, relegating the format to the past—a visual haze of distant Kodachrome and Ektachrome memories.

With slides incorporated into their medium, the artists featured in ReVIEWing the 35mm Slide revive these once-powerful recorders of art, memory, and time, transforming the worlds contained within their 2-inch x 2-inch cardboard or plastic frames. Curator Maryann J. Riker notes, “By elevating the 35mm slide and the slide projector, we celebrate the slide as a form of storytelling and thereby commemorate its importance in the history of recording culture.”

Community Collaboration, with Maryann Riker: The Preservation of Memory

Memory: the power of remembering; what is recalled or remembered.

This collaborative project is based on the 35mm slide and its ability to capture moments in time—a visual memory on plastic that allows persons to revisit familial milestones, artistic masterpieces, scientific discoveries and more!

Preservation of Memory is also a statement about the loss of memory. The maturing process diminishes short-term memory as does the onset of dementia and Alzheimer’s disease. Having several friends experiencing this prompted me to create this work.We invite the public to bring slides of their favorite artwork, events, or other moments captured by the 35mm slide, and place them in the provided. Or you can select a slide from those available in the gallery or an empty slide frame and write a word or a short statement commemorating an important moment in your life.It was the power of the 35mm slide and now, digital media, to retain these moments which our memory may lose and allows us to revisit.

Stephan Jahanshahi, is a visual artist currently working in Brooklyn NY,  “A Photograph Can’t”  is comprised of over 70 slides played on a loop in a Kodak Carousel projector. 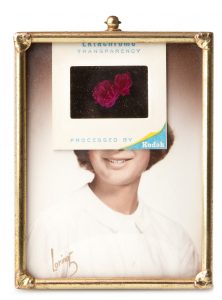 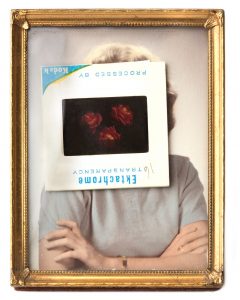 The slides are of flowers, roses. By layering the slides with found photographs, anonymous portrait of women are created, their faces covered by a very feminine symbol: flowers. 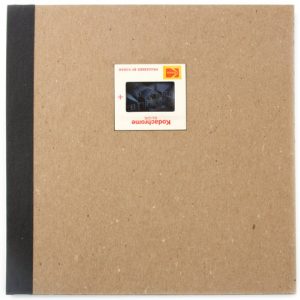 Stirling describes best, with a dash of worse as an attempts at forming a narrative from parts that do not make the same whole, yet it succeeds at doing so when the reader enables its completion. On recognizing the visual language of a family album, readers call into play the personal vocabulary of their own family pictures, and draw upon the archetypal, collective, family album. It is then that the superimposition of two separate yet interrelated sets of conditions, personal and collective, occurs. By making that comparison the viewer accepts, even if not quite realizing it, that there is a mutual cultural language common to family albums that subsequently turns any family album into a part of a collective. The integrity of a personal history, as a set of unique memorable instances, recorded in images that form traditionally family albums, is jeopardized by the awfully similar type of images in this collective family album.  The cover of the book is made of a raw book board, into which one Kodak 35mm color slide is debossed. The slide’s content only becomes apparent upon lifting the cover, and when light can pass through it.

“Strange Histories” is a body of work created from collaged 35mm photographs. In early 2013 Ian Trask acquired a collection of  5,000 slides from the Tractenburg Family Sideshow Players, a NYC-based family band. They had originally collected the slides while on tour and used them as inspiration for their music and stage performances. Trask was immediately intrigued by the rich historical conversation he had inherited: thousands of images, spanning roughly five decades of time and experience.By selecting slides with specific transparency values, Ian learned to experiment and layer the images in an analog photomontage process. The resulting photographic collages present surreal histories that question the truthfulness of the original images. After spending countless hours peering into the stories of the people who took the pictures, and considering the complex life cycle of the slides themselves, he found himself returning to the notion that together we create strange histories.

Trask is currently collaborating with fellow artists, writers, and collectors to create a short story book inspired by the collages. By pairing the photocompositions with written captions, the past is recontextualized and infused with the imagination and perspective of today. Publish date TBD.

Lola Wegman scanned vintage found-slides and printed the files as black-and-white prints. The images selected documented and memorialized the subjects in a moment in time. By enlarging the small 35mm color images into the larger print a greater visual impact is created. The viewer is able see the image immediately without the use of intermediary equipment—whether a loop or magnifying glass, a portable viewer or a slide projector. The use of black-and-white also transforms the way we see and interpret the images. 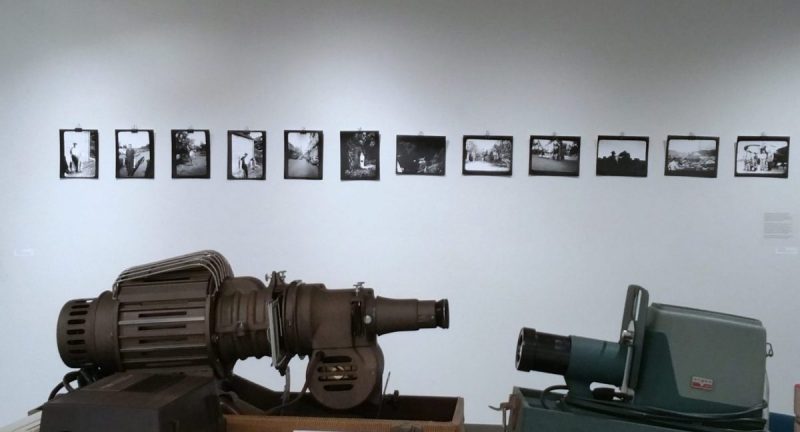