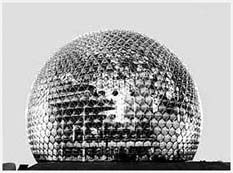 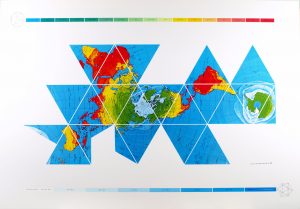 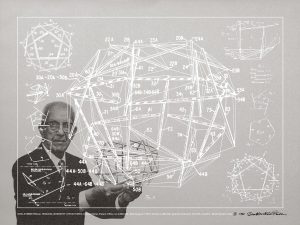 Buckminster Fuller, with model for Oxford Theater Project, from the Inventions: Twelve Around One, portfolio. Courtesy Carl Solway

Survey of BUCKMINISTER FULLER’S most important inventions and cultural contributions is subject of exhibition at Lafayette College’s Williams Center Gallery.

The exhibition and related programs are free and open to the public.

Buckminster Fuller: Architect, Engineer, Inventor, Artist is a survey of Fuller’s most important inventions and cultural contributions. Fuller (1895-1983) was one of the most influential thinkers of our time. He re-imagined the world as we know it, from the houses we live in to the cars we drive. Although he is probably most associated with the invention of the architecturally iconic geodesic dome, his ability to think across disciplines—connecting the worlds of science, engineering, architecture, environmental design and art—was an equally important and lasting contribution. Concerned about economic sustainability, he integrated energy and material efficiency in his designs.

In the summers of 1948 and 1949, Fuller taught at the legendary Black Mountain College in North Carolina. Here he met John Cage, Merce Cunningham, Robert Rauschenberg and other artists and writers who would influence his thinking and who he would in turn influence greatly.

The exhibition centers on the Inventions print portfolio—a collection of Fuller’s key patents such as the 4D House, the Dymaxion Car and the Geodesic Dome. Also included in the exhibition are the Dymaxion Air Ocean World Map, Fuller’s radical reimagining of the way we draw the map of the world; extensive archival material, including documentary films; Fuller’s Rowing Needle, a 21-foot catamaran with twin hulls which Fuller designed for use in the choppy waters off the island where he lived in Maine; Closest Packing of Spheres, 1980; and the spectacular Duo-Tet Star Polyhedras, 1980.

Fuller was the architect for the U.S. Pavilion, a geodesic dome, at the 1967 International and Universal Exposition–Expo 67–in Montreal. In 1995 the dome was turned into an interactive museum as the Biosphère, dedicated to environmental issues.

The work in this exhibition is on loan from Carl Solway, Cincinnati, Ohio, who worked with Fuller to realize many of his projects and who generously assisted in organizing this show.

Thomas T.K. Zung will give a lecture, “The Dymaxion World of Buckminster Fuller,” Sep 14, at 4 p.m. at the Williams Center for the Arts. Zung is uniquely positioned to talk about Fuller. He was a student of Fuller and, with Fuller’s Synergetics, Inc., designed the elongated geodesic dome in Cleveland, Ohio, in 1968. He has worked on various geodesic domes, including the Jitterbug sculpture, Tensegrities, the Fly-Eye’s dome, and Fuller’s last invention, the Hang-It-All. Zung is president of Buckminster Fuller, Sadao & Zung, served as a founding member of the Buckminster Fuller Institute. He is currently a Distinguished Senior Fellow to the Stanford University Libraries, and founding board member of SNEC-RISD.

After the talk, Zung will be available to sign copies of Buckminster Fuller, Anthology for the Millennium, a volume he edited. Originally published as Buckminster Fuller: Anthology for the New Millennium, Zung updated this popular volume of chapters from Fuller’s many books. This revised edition, which includes images omitted from the first edition, reflects a culture that has changed with time, much of that change predicted by Fuller.

A reception at the Williams Center Gallery follows the talk.

Zung’s talk is funded in part from an Arts Infusion grant made possible by generous support from the Andrew W. Mellon Foundation. 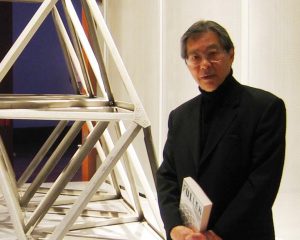 Lafayette is located in Easton, Pennsylvania, on the scenic Delaware River, 72 miles from New York City, and 60 miles from Philadelphia. For more information and gallery hours, visit the art galleries’ website: galleries.lafayette.edu.

Easton is served by Trans-Bridge Lines, a commuter bus from the Port Authority Bus Terminal in New York City

All gallery lectures and exhibitions are free and open to the public. They are sponsored by Lafayette Art Galleries.

Lafayette College Art Galleries and EPI receive state arts funding support through a grant from the Pennsylvania Council on the Arts, a state agency funded by the Commonwealth of Pennsylvania, and the National Endowment for the Arts, a federal agency.
Images:
1:  Building Construction/Geodesic Dome, 1951, screenprint on Lenox paper; from the Inventions: Twelve Around One, portfolio. Courtesy Carl Solway

3. Buckminster Fuller, with model for Oxford Theater Project, from the Inventions: Twelve Around One, portfolio. Courtesy Carl Solway
High resolution images are available at  https://flic.kr/s/aHsm1JoFaE and through DropBox or Hightail by request.