Update, October 18: Students and faculty raise a dome at homecoming. Read about it here.

Buckminster Fuller (1895-1983) was one of the most influential thinkers of our time. He re-imagined the world as we know it, from the houses we live in to the cars we drive. Although he is probably most associated with the invention of the architecturally iconic geodesic dome, it was his ability to think across disciplines, connecting the worlds of science, engineering, architecture, design and art that was one of his most important and lasting contributions. In the summers of 1948 and 1949, Fuller taught at the legendary Black Mountain College in North Carolina. Here he met John Cage, Merce Cunningham, Robert Rauschenberg and other artists and writers who would influence his thinking and who he would in turn influence greatly. 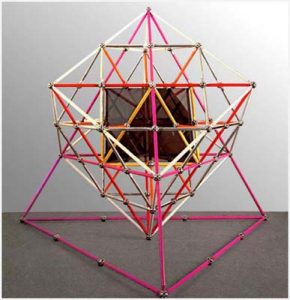 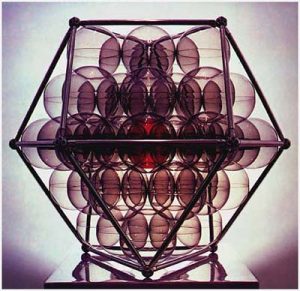 Buckminster Fuller: Architect, Engineer, Inventor, Artist is a survey of Fuller’s most important inventions and cultural contributions.  The exhibition centers around the Inventions portfolio, a collection of Fuller’s key patents such as the 4D House, the Dymaxion Car and the Geodesic Dome.  Also included in the exhibition are the Dymaxion Air Ocean World Map, Fuller’s radical remaining of the way we draw the map of the world; extensive archival material including videotapes of Fuller speaking; Fuller’s Rowing Needle, a 21 foot catamaran with twin hulls which Fuller designed for use in the choppy waters off the island where he lived in Maine; Closest Packing of Spheres, 1980; and the spectacular Duo-Tet Star Polyhedras, 1980.

The material in this exhibition is on loan from Carl Solway, Cincinnati, Ohio, who worked with Fuller to realize many of his projects and who generously assisted in organizing this show.

Full descriptions of the works in the exhibition can be found at the artist’s page at Carl Solway Gallery.