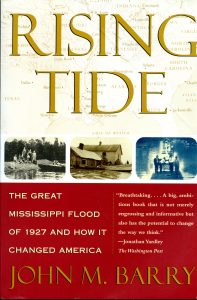 Historian John M. Barry sets the historical context for Alison Saar’s Breach exhibition, including a summary of weather conditions and Army Corps of Engineers’ projects that contributed to the devastating effects of the 1927 flood, the impact on African-Americans living in the Delta, and the long-term social, cultural, and political changes that resulted nationwide from this historic river disaster.

He notes that [The flood] had a more substantive impact on the nation than any other disaster in U.S. history. Yet it is less well known than the San Francisco earthquake, the Chicago fire, even the Johnstown flood. That fact in itself is a lesson; to understand history, one must look deep.”

He is author of Rising Tide: The Great Mississippi Flood of 1927 and How It Changed America. Rising Tide was the winner of the 1998 Parkman Prize from the Society of American Historians, named in 2005 by the NY Public Library as one of the 50 “most memorable” books of the preceding 50 years, and was on the NY Times “notable” book list.

Presented in conjunction with the Grossman Gallery exhibition Breach by artist Alison Saar; the artwork in Breach is informed by the 1927 flood.

Barry’s talks are cosponsored by Civil Engineering, Geology, History, the Engineering Division, LEAP, Environmental Science and Environmental Studies, the Offices of the Provost and President, and the Lafayette Art Galleries.