Martha Posner’s work is marked by an “emotional rawness” due in part to her evocative and corporeal transformation of materials: beeswax, synthetic hair, pigment, mud, fabric, and fibers, writes Ann Landi in ArtNews. Her sculpture and drawing combine autobiography, mythology, alchemy, history, and fairy tales.

In her earlier work, Posner’s signature garments are empty vessels filled with associations. In the present series from 2011 to 2016, the previously omitted figures have taken form. In Mercy, an installation at the Grossman Gallery, their life-sized, child-like bodies are caught in a moment of transformation. The implied movements and life forms suggest pagan mythology yet leave themselves open to other stories.

Posner’s art is “informed by living in the middle of the forest,” she says, and she credits travel and the ceremonies of cultures that live closer to the natural world as formative influences. Mercy suggests that you have stumbled upon an enchanted glade deep in the forest and encounter: woodland nymphs chafing against their own changing bodies, curving and intertwined tree branches, and wax-covered girls dresses orbiting in a sculptural vortex of transience and transformation. Lyrical, vulnerable fecundity confronts emptiness. Presence is pitted against absence. Woodland beauty flirts with death and loss.

Martha Posner asks the question: “What makes an object greater than its materials? Why is the mask of a shaman or the surface of a Greek icon more than feathers, wood and paint? When is the moment of transformation?” She answers her own question with Mercy by apportioning transformation between a handful of sculptures: the installation is a chain of empathetic moments linking materials, nature and audience; it does not build to a single, explosive moment of dramatic realization. Thus a deer’s skull with eerily intact fur, a tree that resembles a hooded magician, and burls of wood that recall delicate female anatomy steep slowly in the imagination, recreating natural mystery.

To Posner, the objects in Mercy are consecrated, or dedicated to sacred service, since bits of nature create sharp contrast in a pristine gallery; though, she says that she doesn’t presume that the objects come alive under her hand. Mercy is broadly based in Druid tree worship and shape-shifting between animals and humans. It also obliquely refers to Aztec worship of the god Xipe Totec, invoking priests who wore flayed human skins, as they embodied the death/fertility god. The exhibition revolves around bark, skin, feathers and hair, connecting empathy through complex surfaces with touch. When Posner dons a costume wing of peacock feathers, I think of how it would feel on my skin, heavy yet silky. Wearing a garment, or dressing in costume, begs the question: Does wearing approximate being, since skin is like a garment? It’s a short step of the imagination between appearing and feeling to be another creature and being another creature. The transformation could be initiated by empathy or the ability to place oneself in another’s position, and in this case the “other” is a sculpture, animal or tree.

Mercy ebbs and flows around the male Guardian Figure at the rear of the gallery. Placing a found section of branch and root in a circle of stones, adding a wing and sap-blood to the wound on its back, Posner wakes the Guardian within the wood. Aloof, powerful, upright, and re-rooted in the earth by heavy rocks, the tree figure hurls spells, and directs the steps of the dresses and tree nymphs without relieving their discomfort. In this sense Mercy behaves just like nature. 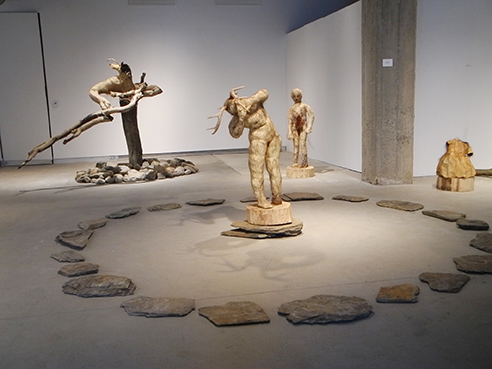 Martha Posner lives and works on a farm in Martins Creek, Pennsylvania. She has had solo exhibitions in the United States and abroad: Centro Cultural de Cooperacion, Buenos Aries, Argentina; Accola-Griefen Gallery, New York City; The Allentown Art Museum, Allentown, PA; The Hunterdon Museum of Art, Clinton, NJ; Albright College Museum, Reading, PA; The Birmingham Museum of Art, Birmingham, AL and The Cleveland Museum of Art, Cleveland OH, the Williams Center Gallery, Lafayette College in 1993, among others. Her work is held by numerous private and public collections including The George Gund Foundation, The Allentown Art Museum, The Butler Museum of Art, Youngstown, OH; and the Great Northern Corporate Center, Cleveland, OH. She has received the Mary H. Dana Award from Rutgers University, The Experimental Printmaking Institute Residency Award from Lafayette College as well as Fellowships from The Ragdale Foundation and The Virginia Center for the Creative Arts.