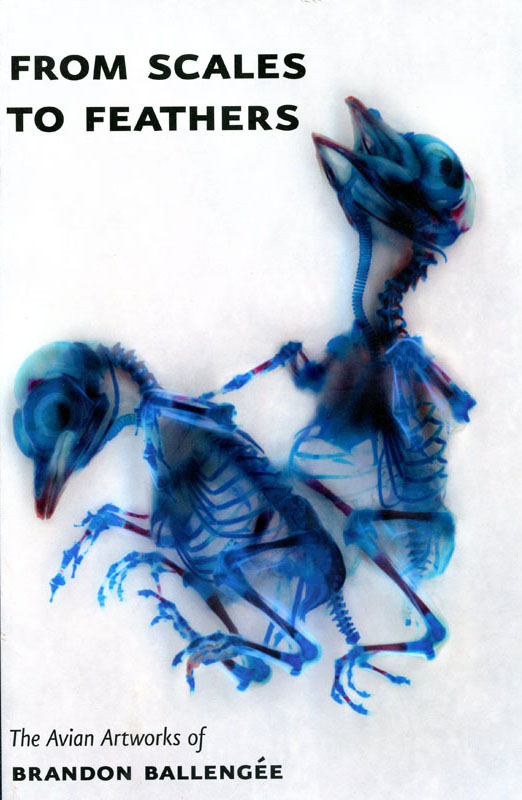 2 Nature’s Fancy: Charles Darwin and the Breeding of Pigeons,
James A. Secord

Published on the occasion of Brandon Ballengée’s exhibitions Seasons in Hell and the joint exhibition From Scales to Feathers: The Evanescent Presence of Sculpted Wings.

Artist, biologist and environmental educator, Brandon Ballengée creates transdisciplinary artworks inspired from his ecological field and laboratory research. Since 1996, a central investigation focus has been the occurrence of developmental deformities and population declines among amphibians and other ectothermic vertebrates. From 2009 through 2015 he continued his amphibian research as a Visiting Scientist at McGill University (Montréal, Canada) and in 2011 he was awarded a conservation leadership fellowship from the National Audubon Society’s TogetherGreen Program (USA). Ballengée’s art has been exhibited internationally and in the summer of 2013 the first career survey of his work debuted at the Château de Charamarande in Essonne (France), and travelled to the Museum Het Domein in Sittard (Netherlands) in 2014. A mid-career retrospective of his work will open fall 2016 at the University of Wyoming Art Museum. He holds a Ph.D. from the University of Plymouth (England) in collaboration with the Hochschule für Gestaltung Zürich (Switzerland). Currently he is a Postdoctoral Researcher in the Biological Sciences Department at Louisiana State University studying the impact on fishes from the 2010 Gulf of Mexico oil spill.

Roel Arkesteijn is curator of contemporary art at Museum Het Domein, in Sittard, the Netherlands, where he presents exhibitions focusing on ecological art and art for social change. After his studies in art history at Leyden University, Arkesteijn worked as a curator at the Museum of Modern Art, in Arnhem; the Stedelijk Museum, in Schiedam; and the GEM Museum of Contemporary Art, in The Hague. He is a guest lecturer at the Radboud University, in Nijmegen, and a regular visiting lecturer at the HISK, in Ghent, Belgium. Arkesteijn has published numerous books and catalogues; as a guest curator, he curated dozens of exhibitions, including shows at De Appel and at the Stedelijk Museum, in Amsterdam.

Joanne H. Cooper is a senior curator in the Bird Group, Department of Life Sciences, Natural History Museum, Tring, Hertfordshire, England. She is currently working on Charles Darwin’s large collection of domestic bird skeletons and skins, which was donated to the Museum in the late 1860s. Although Darwin’s bird collections from his book, The Voyage of the Beagle, are well known, his domestic bird specimens have received little attention, despite their vital role in the development of his evolutionary ideas and their prominence in On the Origin of Species. Cooper is researching Darwin’s work on this fascinating collection, especially the fancy pigeons, with particular emphasis on linking information from archives and publications back to individual specimens in the collection.

KuyDelair is a poet, musician, and performer. Born in Paris, she has appeared primarily in France and Canada. Revisiting poetry as a performative art in the ancient Greek tradition, she recently presented one of her neofeminist stage experimentations, Les Glas Avortés, at Place des Arts, in Montreal. Exploring the topics of birth, body as a voice, punctuation as a rhythm, and death as a cycle of nature, she is currently preparing a book of her poetry for publication.

James A. Secord is director of the Darwin Correspondence Project and professor of history and philosophy of science at the University of Cambridge. He is the author of many articles and several books, including Victorian Sensation: The Extraordinary Publication, Reception, and Secret Authorship of “Vestiges of the Natural History of Creation,” winner of the Pfizer Prize of the History of Science Society. He edited and wrote the introduction to Charles Darwin: Evolutionary Writings, published in 2009 by Oxford University Press. Most recently, Secord is the author of Visions of Science: Books and Readers at the Dawn of the Victorian Age (University of Chicago Press, 2015).