In the Line of Duty: Collecting African American Art 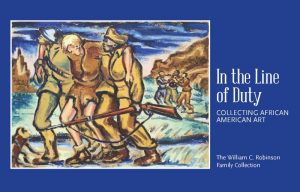 The relationship between collector and artist—frequently founded in shared beliefs and passions connected to the creative enterprise—evolves as the patron witnesses first-hand the struggle the artist faces. This is often particularly true in the case of African American artists, who seek to assert their voices among the larger chorus of artists and within the art world in general.

An illustrated catalogue with introduction by William C. Robinson and essay by Curlee Raven Holton, the College’s Roth Professor of Art and founding director of Lafayette’s Experimental Printmaking Institute (EPI) will be available.