Photojournalist and activist, Donna Ferrato, “I am Unbeatable.” 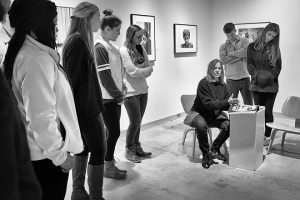 Donna Ferrato, seated, with digital photography students after her talk, “I am Unbeatable,” Mon. Oct. 19. Photo copyright 2015 by Charles Stonewall

EASTON, Pa. (www.lafayette.edu) Oct. 12, 2015 — Donna Ferrato, internationally acclaimed photojournalist, activist, and advocate for victims of domestic abuse, will present an artist’s talk, “I Am Unbeatable: True stories about women who left their abusers and never went back,” noon, Mon., Oct. 19, in the Williams Center for the Arts, room 108, at Lafayette College, 317 Hamilton St., Easton. Sponsored by Lafayette Art Galleries, it is free and open to the public.

Her experiences with victims, their families, and police led to a career as an advocate for battered women, and changed how abuse is viewed and how it is treated by doctors and law enforcement officers.

Powerful images taken during the decade Ferrato spent with victims of domestic violence are part of the exhibit FOCUS II on display in Lafayette’s Grossman Gallery. These images also appear in her 1991 book, Living with the Enemy, which Aperture has reprinted four times since its release.

In 2011, the New York Times’ blog “Lens” described her work as “…the rarest of photographic projects: one that has significantly affected the problems it documents, helping to change laws and establish and finance domestic violence shelters throughout the country.”

She continues to publish new work on women’s rights; her photographs of abortion clinics in Detroit, Texas, and Virginia are featured in the Sept./Oct. 2015 issue of Mother Jones.

Her most recent work focuses on the spirit and evolution of TriBeCa. She is currently at work on a book on the recent history of TriBeCa, to be published in the spring of 2016.

Ferrato has been a member of the Executive Board of Directors for the W. Eugene Smith Fund and was president and founder of the non-profit Domestic Abuse Awareness (501-c3).

FOCUS II is the second in a series of exhibitions highlighting vintage and contemporary photographs in Lafayette’s art collection. Photographs by Ferrato in Focus II are gifts to the art collection from The Cass Family Foundation in 2014, and Robert Cranley, also in 2014.

The Grossman Gallery is located in the Williams Visual Arts Building, 243 North Third Street, Easton. Gallery hours are Tues. through Sat., 11 a.m. to 5 p.m. On Monday, Oct. 19, following Ferrato’s talk, the gallery at WVAB will open from 1 to 5 p.m.