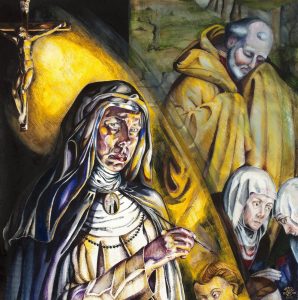 Holly Trostle Brigham, of Philadelphia, is a figurative painter who creates mythical allegories of contemporary and historical subjects. She portrays  women as strong, self-possessed, and even godly, as many of her subjects come from mythology: “Inspired by [Audrey] Flack’s use of mythology, her concept of reclaiming the matriarchy and the way in which Flack talked about how women artists could approach the female nude without objectifying it since subject and object were one and the same, Brigham began a series of watercolors for which she, herself, posed as the nude model.” (Judith Brodsky and Ferris Olin, 2013)