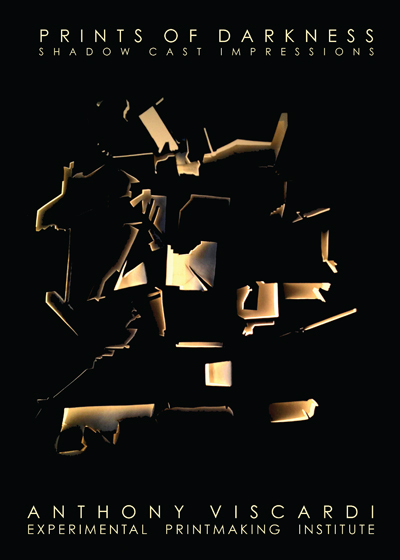 The practice of engaging the shadow as the progenitor of form has directed my architectural scholarship and artistic investigations for over twenty years. The shadow is born of one thing yet reveals another as its transparent and immaterial essence animates the surface upon which it falls. It is this phenomenological quality of the shadow, once severed from the object that ignites my imagination and informs my creative process.

The work of this exhibition, Prints of Darkness, derives from a recent series of drawings, Tracing Time to Measure Space, in which I record the passage of time at three intervals—morning, noon and night—by sequentially tracing the shadow of an architectural object as it is constructed in one day’s time. The object is then dismantled, releasing the shadow to exist as a singular composite drawing of individual moments frozen into a single image, a “shadow map” from which new iterations of the shadow may be formed. In this process, I use pencil on Mylar and purposely allow my hand to smear the graphite. Sections of the drawing are then erased to articulate highlights against the complex pencil wireframe. The resulting palimpsest retains the evidence of the process while revealing something new.

When anticipating my 2013–14 artist’s residency at the Experimental Printmaking Institute (EPI), I was concerned about how I might express the ephemeral effect of the graphite “smear” via the techniques of printmaking. With great insight, Professor Curlee Holton, founding director of EPI, suggested that my focus should be with finding the “smear” that is inherent to the printmaking process, rather than seeking to replicate the effect of the smear. And so, in collaboration with Jase Clark, EPI’s master printer-in-training, I began to explore the potential of the printmaking process as a means of reflecting or re-casting my shadow drawings.

In this exhibition, the latent image of the shadow revealed in my drawings assumes new substance and form, translated through a variety of printmaking methods, including calligraphy, etching, silkscreen, viscosity, embossing, and laser cutting. Whereas my shadow drawings are projections of their objects, my prints became their inverse or reflection, shadow cast impressions—Prints of Darkness.

Anthony Viscardi was artist in residence at Lafayette’s Experimental Printmaking Institute, EPI, in 2013–14. He is a Professor of Architecture at Lehigh University, Department of Art, Architecture and Design. http://www.lehigh.edu/~av03/