Double click on each image to read the text.

This edition of the Catalog of Extinct Birds, completed in 2009, references the list of globally extinct birds published by the IUCN.

The Catalog of Extinct Birds, a sound performance work written for one or more pianos, algorithmically translates the names of nearly two hundred extinct avian species into brief musical phrases. In their bird-like brevity, these phrases serve as stand-ins for sounds we can no longer hear. Besides generating musical patterns to be played with two hands, the Catalog also provides a template for the construction of hundreds of twenty-six inch Piano Cluster Boards (PCB’s). For each species there is a corresponding pair of boards, one for the scientific genus classification, and one for the species name. Like oversize wooden hands, the PCB’s are calibrated to “unlock the sound” of the Latin names on the piano keyboard.

The Catalog of Extinct Birds was conceived in homage to the great modernist French composer, Olivier Messiaen. In trespassing on the title of his canonical composition, Catalogue d’Oiseaux, The artist acknowledges  his debt to this work  bu also notes a departure from it. Where Catalogue d’Oiseaux developmentally and mimetically evokes the presence of extant European birdsong, Catalog of Extinct Birds marks absence through sonic abstraction. Like rubbings taken off memorial stones, the musical phrases and decaying clusters of sound contained in Catalog of Extinct Birds represent an act of remembrance focused on all that’s readily available — the names.

The number of extinctions among birds — as well as other families of life — will surely continue. Therefore, the Catalog of Extinct Birds, like all such catalogs, will need to expand continuously. 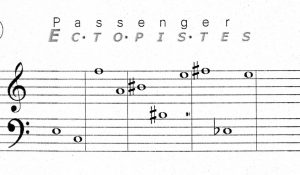