Michael Pestel
For the past 22 years I have built architectural sound installations related to bird song and bird extinction. I have performed in those installations on flutes and various invented hybrid instruments and sound devices such as the birdmachine, pianotable, and birdrawingtable. This work has been inspired and informed by my performances with living birds in aviaries, forests, parks, shrines, and bird preserves in North America, Europe, Japan, and Australia.

It all started, however, at the National Aviary in Pittsburgh in 1992. In my first performance there, I recited the list of more than one hundred extinct bird species and the approximate date of extinction one by one. I followed each pronouncement with a short, often multiphonic bird-like gesture on the flute. What was significant about that—beyond the uncanny dialogical responses I was getting from various birds—was the deliberate position I took as a stand-in for voices eradicated by my own species.

Since that performance at the National Aviary, I have returned dozens of times to perform live with the birds, both as a soloist and with a diverse range of musicians and sound artists, including my Syrinx Ensemble, a group dedicated to performing live with birds (2011 for Mattress Factory and National Aviary Residency), and in 2008 with composer/saxophonist Anthony Braxton. In 2006, the Aviary produced a CD commemorating 14 years of my performances there. In recent years, I have also performed bi-annually in the aviaries at the Central Park and Bronx Zoos, most notably in 2006, when I participated in the World of Birds Exhibit at the Bronx Zoo with David Rothenberg in the BBC film version of his book Why Birds Sing. The latter chronicles both my performances in Pittsburgh’s National Aviary and my adventures with Rothenberg playing with lyrebirds in the rain forest near Brisbane, and again in the eucalyptus groves outside of Melbourne.

In Writing Lessons 2, eight small slateboards mounted with audio speakers extend like prosthetic arms from the node points where branches have been sawed-off from a giant oak tree. The speakers project the sound of numerous birds once prevalent in the area before we humans pushed them out. These sounds are mixed with the sound of 25 students writing the Latin names of those bird species on slateboards. Thus, writing these names in the context of an educational structure, dramatizes the disconnect between classifying and experiencing the thing named. Yet, the irony here is that the very sound of writing in chalk, a sound similar to the chatter of birds, draws us back into the realm of direct experience, i.e., of the bird itself.

Along similar themes, Dutch eco-artist, Jeroen van Westen and I have collaborated for over a decade on a series of exhibitions. Ornithology/Shadows (1996) traveled to four sites in The Netherlands: DeWeerribben Nature Preserve, Museum of Natural History in Leeuwarden, Avifauna Aviary near Amsterdam, and Apollohuis Sound Art Gallery in Eindhoven. At the Pavillions Museum in Almere (2001) and also at Carnegie Mellon University’s Miller Gallery (2002), we created a virtual, interactive soundscape called Birdscape that featured the sounds of twelve endangered Dutch birds reacting to the movements of gallery visitors in real time. 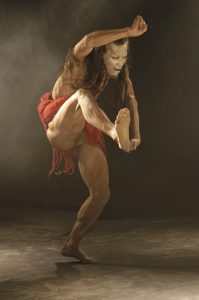 Another decade-long collaboration—Stray Birds—is with former Sankai Juku butoh dancer, Taketeru Kudo. This collaboration emerged from performances with Kudo at the Institute for Contemporary Art in London (2000) and Maison de la Culture du Japon in Paris (2000), as well as from an Asian Cultural Council Grant to research birds in Japan (2001). Stray Birds focuses on the interaction between bird sound and bird movement and has been performed at the Mattress Factory, Chatham College, and Carnegie Mellon University (Pittsburgh, 2001), Die Pratze Theater and the French Embassy (Tokyo (2006), and Prout Hill Outdoor Theater, Middletown, CT (2007).

One of my favorite performance works is Riverpiano (Allegheny River, Pittsburgh 2005). In the performance, I am playing prepared grand piano and bird whistles on a 20′ raft floating down the Allegheny River in Pittsburgh. The act of thus floating was inspired by a fictional, prophetic dream the composer Heitor Villa Lobos might have had a few weeks before he died in 1959. In the dream that I imagine, he is playing his Steinway aquaplaning up the Rio Negro in Brazil searching for the birdsongs of his youth. He plays a music unlike any that he has ever heard and is transported into the realm of the birds. Suddenly, in the intensity of the music, the piano bursts into flame. In his mind’s eye, he is pulled upward into the stratosphere as his piano gradually swells to the size and proportion of Brazil now engulfed in smoke and flames. 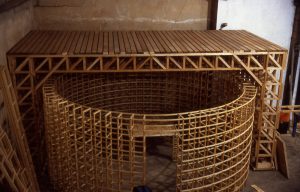 In the decade (1982-1992) before discovering my passion for birds and birdsound, I primarily built large-scale, site-specific architectural structures out of wood. Sighting Wheel I. (Artpark 1985) and II. (Sylt, North Sea 1986), and Hadrian Spin-Out (University of Pittsburgh Gallery 1988 and University of West Virginia Gallery 1989) focused on the process of sighting and callibrating the horizon, as well as, in the case of the latter, a whirling dervish-like structure for music. Sighting Wheel II was constructed on the dunetop ruins of a WWII anti-aircraft bunker on the North Sea island of Sylt. It functioned as a kind of zoetrope-in-reverse that placed the viewer on a rotating seat at the center of its 360 degrees of horizontal image production. The purpose of the bunker was thus deflated through the act of observing the surrounding land-and-sea-scape without either a camera or a gun.

Other works from this period include a structural cantilever system spanning three rooftops at Crossroads School in Santa Monica (Sine Wave 1986), and a site-specific pedestrian bridge proposal for Pittsburgh (Piers Project 1991). The latter won a collaborative AIA Design Award. In addition, there were architectural structures for music. Table of Changes (University of Pittsburgh Gallery 1988 and University of West Virginia Gallery 1989 was a large-scale structural chess table based on the I Ching. Agronome, (Carnegie Mellon University Gallery 1990) suspended a prepared upright piano on an axle between two eight foot structural wooden wheels. These were turned by a driver/pianist seated on a tractor perch, pedaling the vehicle at a snail’s pace.

Ohio Gauntlet (Three Rivers Arts Festival, Pittsburgh, 1990) was a 725’ walkway and structural wooden tunnel straddling a wall along the Monogahela River at its confluence with the Ohio and Allegheny Rivers. Every twelfth floor board had a number and name of an animal routed into it. This accounting came from Pittsburgh fur trapper George Allen’s 1759 ledger of transactions at this very site along the river. Traders typically exchanged booze for furs with native Americans, got them drunk and tipped the scales. In this sense, Ohio Gauntlet was a 725’ long account book of British colonialism.

* * *
I invite the reader to peruse my website (www.michaelpestel.com) for further information, as well as the links listed below. With my increasing focus on bird sound and bird extinction as the center of gravity for my artistic projects, a more seamless world of thought and experiential practice has opened up. The current exhibition in the Williams Center at Lafayette College—Requiem: Ectopistes Migratorius, along with Catalog of Extinct Birds—extends the minimalist and contextual strategies of earlier work, and seeks to reconnect us with the lost and the sublime.