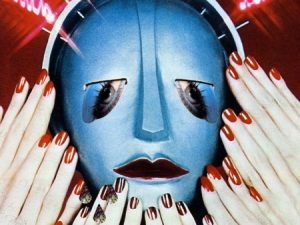 Venusia, named after the ancient Greek city dedicated to the goddess Aphrodite, is a video animation-investigation of the cult of beauty, composed almost entirely of body parts cleanly scalped from the pages of fashion magazines, opulent metal-tone dangles, and encrusted jeweled broaches from the velvet cases of advertising campaigns. Pressing the pages of fashion up against expansive milky galaxy cosmos sublime, Bouvy and Gillis montage a rapid-fire series of modelesque female profiles (each face simply occupying one cell in this stop motion movement) in which they consume a string of glowing pearls that drop from the celestial heavens. A peculiar repetitive soundtrack underscores the rising robotic femme idol that dominates the strange gravity defying enigmatic dance performed by the fractured figures. Top-coat manicured hands bow at the feet of the space-noir idol as a pantheon of jeweled insect broaches, flowering plants, and adornment offerings are laid at the feet of the temple of beauty. Bouvy and Gillis are fascinated with representations of the body and concepts of beauty deeply steeped in today’s popular culture. The video is influenced by French stylist and photographer Serge Lutens, probably best known for his 1980s art direction and photography for Japanese cosmetics company Shiseido, but it also recalls futuristic and macabre surrealist imagery.