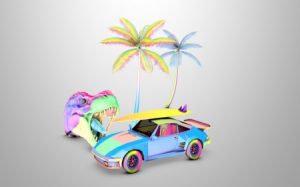 L.A. Gear or: Improbable Waste by Noah Spiderman & Scott Gelber seems like a

3-d video game gone amiss. It outlines a vacuum-like space, a seamless backdrop for symbolic objects and props of consumer culture, whirling in a post-human Dance of Death. Exclusive sport cars recalling the late 1980s American new wealth, SUVs, hurled Red Bull cans and sports gear emphasizing endurance and athletic maleness, and palm trees suggesting the clichéd utopian paradises are all depicted in a psychedelic colorful palette which highlights them as virtual objects and unreal visions. Together with a dinosaur head as ancient relic, they spew liquids recalling some metallic molten magma and blood, to be gradually replaced with exploding human skeletons and flashy technological accessories, and an alien rendered in a Roswellesque pop culture style stricken by those floating surroundings. In the second part of the video, with much more aggressive soundtrack, this whirlpool of imagery is even more amplified with weapons and coffins, as quotations from the most recent media coverage on violence bursts and killings in most common daily situations. In a few moments of the video, Spiderman & Gelber insert spiritual imagery like light flashes or a crucifix; however, these motifs point more to the worship of objects in our contemporary commodity culture than offering any kind of contemplation and salvation.