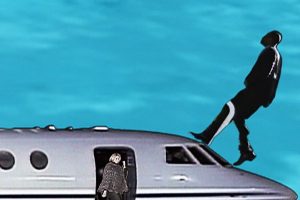 Skvirsky’s El Espectáculo, borrows excerpted footage of celebrity trials and daytime talk shows arranging them in a bizarre and cacophonous marching parade compositions. Through the artist’s animation techniques, figures like Michael Jackson, Martha Stewart, OJ Simpson, Winona Ryder are duplicated to the size of small battalions. They are removed from their original context and gain marionette-like postures and repetitive synchronized gestures, which, in Skvirsky’s words, “echo the choreography of military marches while referencing Busby Berkeley’s film extravaganzas.” Skvirsky draws out interconnections between the entertainment/news media complex, prison complex, and the military industrial complex, three of the strongest industries in America today, in her animated tableaus. The logos news franchises Fox, CNN, and MSNBC are reduced to bit pixel games of pong and asteroids further collapsing the divide between entertainment and news. The animation’s soundtrack to which Skvirsky’s parade of personas is choreographed range from the Broadway musicals, marching band movements, tabloid commentary, sounds of fireworks, and audio of semiautomatic gunfire. They all conflate the spectacle of the entertainment and space between entertainment and war.