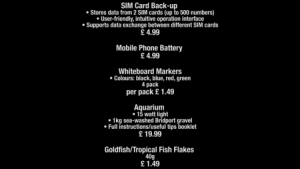 Jan Nalevka’s animation Final Countdown simply and plainly highlights an examination of consumer commodities. Taken from grocery store advertisement leaflets collected by the artist, the list of products with prices scroll past a black background like film credits. The currency context of the pound to dollar conversion requires a little mental math to verify a relative value comparison, but the products remain curiously familiar with their conventional language already inscribed in our minds through a constant mass media advertising presence that has become nearly universal. Produced in 2004, inflation and rising cost of food become an index of concern surrounding the food supply chain. The sober soundtrack adjoins this abundance of textual data—a classical composition of a cinematic feeling, which can be read as a requiem to our society of hyper-consumerism.