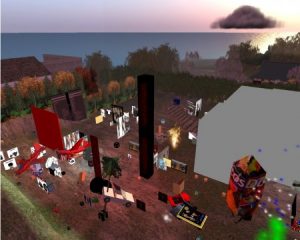 Eteam’s Prim Limit, is a poetic meditation created from the materials collected during eteam’s year-long project in Second Life—the online, three-dimensional virtual social network. There, the artist collective gained a piece of land and opened a public plein-air dumpster in which Second Life players could discard their trash. Eteam’s project focused on what is discarded in Second Life, what happens with these items when

no longer wanted, and the players’ attitudes toward the debris. Throughout a year, the artists observed the dumpster, its continual changes, and the experiences and interaction of avatars within it. The video, with its slow and repetitive rhythm, traces avatars who manage the dumpster and record activities in it, as well as occasional visitors. The video is accompanied by narration from one of the avatars, music samples, as well as quotations from Samuel Beckett’s Endgame, television and movies like Twin Peaks, Sin City and Lord of the Rings, creating the atmosphere of emptiness, entrapment and decay, while also capturing human aspects and intimate interactions in this curious world, which instead of an ideal utopian model, turns out to be just another reiteration of a life dictated by consume-and-discard.