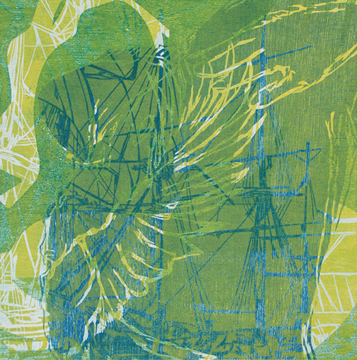 Detail from Totem, Francine Affourtit’s installation in “Room of Relief”

Through the installation Totem, I am seeking to build a visual language that transcribes the complexity of the human condition into a lyrical configuration. Drawing inspiration from the Ojibway concept of Totem, “that form from which I draw my meaning, purpose and being,” I created a series of hieroglyphs that represent the fragments of the psyche. Rendering the images in woodblocks allows me to repeat forms while shifting details, mimicking the call and response of a poetic refrain. The shapes and hieroglyphs reappear like an echo sounding the trace of human emotion. The recognizable forms slip from representation to abstraction, like the mutability of certainty, revealing the inevitability of its failure.

Compounded by the three unique visions that collaboratively form the Room of Relief tableau, the sensibility of a humanity conflicted by the convolution of modernity and circumstance finds a voice.

Born in 1975, Francine Kay Affourtit is an artist, educator, and arts organizer who divides her time between Rome and Philadelphia. She received her BFA from the School of the Art Institute of Chicago, in 1999, and is currently a fellow at Temple University’s Tyler School of Art. Affourtit has exhibited her work both nationally and internationally, at the Corcoran Gallery of Art, in Washington, D.C., and the International Print Center of New York, among other places.