The film Reenactor is inspired by the hours I spent, as a younger person, sitting in the dark in movie theaters surrounded by people, all of us watching time pass by in images and sounds on a screen. Nothing seemed to exist except the film and us. Time didn’t stop. We measured our lives by the images.

Reenactor is a film about how we costume and theatricalize time in order to make sense of our mortality. We dress reality up in history, documentary, biography, or art to restage and reorder the chaos of getting from one side of life to the other. Reenactor is a poor man’s parallel universe; it is my way of haunting time. I call Reenactor my Civil War film but the war I’m referring to is any great trauma that marks the land and its people such that ghosts are spawned and made restless. Most of the film was shot in the city of Nashville, Tennessee, in 2009 and 2010. Footage of historical reenactments was shot in Pennsylvania and New Jersey. 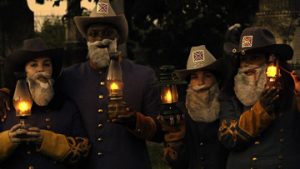