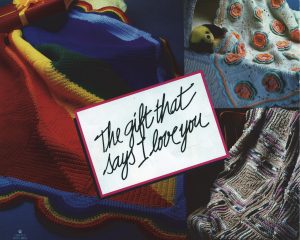 Detail from a 1970s yarn advertisement.

The exhibit kicked off with a “yarn bombing” at noon on Sunday, Jan. 8 led by guest curator Susan Huxley of Easton. Nearly two dozen members of the Lafayette and Easton communities helped attach afghans to the handrail of the staircase that links North Third Street to Lafayette’s main campus.

Huxley conceived the outdoor installation, The Gift That Says I Love You, as a visual symbol of the town/gown relationship between Easton and the college. The colorful afghans will beautify a stark winter urban landscape, which is one of the primary intents of the “yarn bombing/knit graffiti” trend.

An afghan is a knitted or crocheted blanket or “throw.” Afghans can be a simple rectangle incorporating a basic knit or crochet stitch in a single color, a complex composition of multiple joined shapes, or include a pictorial illustration.  Often given as gifts, afghans can be a symbol of affection for the recipient—the selection of a pattern or design, color choice, time spent in creating the throw—are indications of the thought given to making a personalized item. Indeed, during the many hours it takes to complete an afghan the stitcher’s thoughts will often be about the recipient.

Some of these gifts become much loved family heirlooms. Others are stored in the back of linen closets and will eventually be found at thrift shops, priced at less than the cost of a single yarn ball of  the 30-plus needed for an entire afghan. For six months Huxley collected these low-priced afghans from thrift shops.  (The price tags have not been removed and can still be seen hanging from the afghans.)  “Most have never been used. Stitching is a personal, time-consuming process not undertaken lightly, so the people who tossed away these afghans are basically refusing to acknowledge the gift of time and love and showing a lack of respect for women’s work. I want people to react to the hanging afghans. Some, who understand what’s involved in making them, will think it’s horrible to leave them outside for a month. Others will complain that they’re ugly and should be removed. And, hopefully, some will begin to discover the beauty of the stitching and color combinations.”

Yarn bombing has been described as a “cozier version” of street graffiti. Textile artists are participating in community-based projects such as yarn bombing and knit-in-public gatherings. They bring art to an urban environment by merging the best of the graffiti movement of the 1980s with 1960s’ happenings: playful, provocative, collaborative, and impermanent. Also called knit graffiti, grandma graffiti, or guerilla crochet, the events can be as simple as adding crocheted yarn daisies to a chain-link fence or as adventurous and ambitious as  a stitched-yarn transit-bus cover.