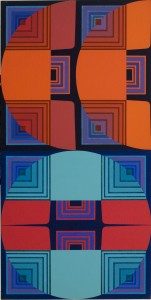 Ryo Tokita was a Japanese born artist who emigrated to the United States in 1969. A painter and printmaker, he studied at the Art Students League and Pratt Institute. In 1989 he moved to Pen Argyle, Penn. Known for his op art and color field pieces Tokita also produced a series of Japanese influenced works. In the 1960s he was one of 46 artists exhibited in the Museum of Modern Art’s International Council’s traveling exhibition, The New Japanese Painting and Sculpture, and in 1985 was one of nine regrouped for the Modern Japanese Abstracts at the Firehouse Gallery of Nassau Community College, Garden City, N.Y.