A book signing of US Future States ATLAS,
Published by Perceval Press, 2009, to follow 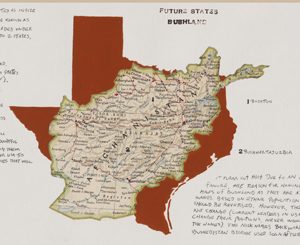 US Future States began as a visual-and-text response to US foreign policy in early 2003—a time when the United States was in Afghanistan and beginning the invasion of Iraq. “By conceptually pushing this global stance a little further,” Mills discovered, “it was possible to justify taking over almost any country.” So he did. In these works, the US of America (USA) expands with the US Global (USG) and morphs into the US Empire (USE). The atlas is a satirical and provocative contemplation of global imperialism.