Grace Hartigan: From the Studio 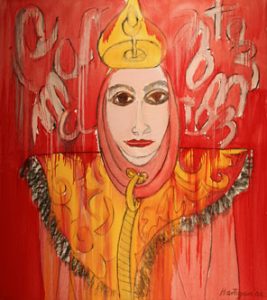 Grace Hartigan: From the Studio features the late works of this great modern artist.

Grace Hartigan’s long and productive career ended with her death in November 2008. In her last works, Hartigan renewed her drive to recreate the Old Masters in a modern idiom, a tendency that marked her work as early as 1952, when it signaled her divergence from abstract expressionism. In these late works, the artist reconceived the Old Masters with vigor and confidence as an accomplished master herself.

In addition to Western art, Hartigan became deeply immersed in Asian art during her late period. In these late works, Hartigan’s incisive drawing is as strong as any period in her career, and her color choices remain highly original. In addition to oil paintings in which she modernized the traditional portrait, Hartigan created monumental watercolors that push the expressive qualities of the medium to new limits. The drive to create was so strong that Hartigan worked until the last moments of her life. Too infirm to work on large-scale pieces, she began to explore a new medium, pastels, with irrepressible vigor in her last days.

Born in Newark, New Jersey, Hartigan was part of the New York School, an informal, influential, and vibrant group of American poets, painters, dancers, and musicians that emerged during the 1940s and 1950s. She moved to Baltimore in the 1960s, and served from 1965 until her retirement as the founding director of Maryland Institute College of Art’s Hoffberger School of Painting. She mentored thousands of MICA students, including painter Ed Kerns, Lafayette’s Eugene V. Clapp Professor of Art. Robert S. Mattison wrote the major monograph on the artist, Grace Hartigan: A Painter’s World (1990). Previous exhibition of Hartigan’s work at Lafayette College were at Van Wickle Gallery in 1983 and the Williams Center Gallery in 1990.

The oil paintings and works on paper have been borrowed from her studio, and through the generous cooperation from MICA faculty member Rex Stevens, Hartigan’s former student, longtime friend, studio assistant, and personal representative.