"Ice Cello" consists of Jeanrenaud playing a cello made of ice, using bows comprised of different materials, including split bamboo, barbed wire, and rasps. Much of the focus is on composer and sound artist Gregory Kuhn's amplification and enhancement of the sound of dripping water from the melting instrument. "Ice Cello" raises questions about permanence and heightens viewers' perceptions of their surroundings. 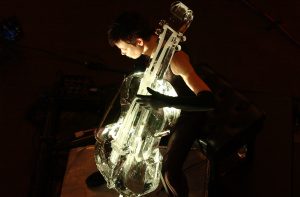 CUTTING-EDGE MUSICIAN AND ARTIST JOAN JEANRENAUD GIVES PERFORMANCES OF ART AND SOUND NOV. 16-17 AT LAFAYETTE’S WILLIAMS CENTER FOR THE ARTS

EASTON, Pa. (www.lafayette.edu), September 21, 2001 — Innovative cellist Joan Jeanrenaud will share two works with Lafayette audiences Nov. 16-17 at the Williams Center for the Arts. She also will participate in a “FluxConcert” with Fluxus artist and performer Larry Miller on Nov. 16.

“Ice Cello” consists of Jeanrenaud playing a cello made of ice, using bows comprised of different materials, including split bamboo, barbed wire, and rasps. Much of the focus is on composer and sound artist Gregory Kuhn’s amplification and enhancement of the sound of dripping water from the melting instrument. “Ice Cello” raises questions about permanence and heightens viewers’ perceptions of their surroundings.

Audience members are welcome to view “Ice Cello” at their leisure, entering and leaving at any time during its roughly 3.5-hour length. Refreshments will be available.

The work is a remounting of “Ice Music for London” in collaboration with Jim McWilliams, Gregory Kuhn, Dan Collard, and Alessandro Moruzzi. “As in the original version, the cello I perform on is made entirely of ice that melts over an extended period of time,” Jeanrenaud explains. “The sound created is from the ice melting and dripping onto surfaces beneath the cello that are then amplified and electronically manipulated so as to create an enveloping sound environment.”

The piece was first performed by cellist Charlotte Moorman in August 1972 for the International Carnival of Experimental Sound in London. Originally titled “Ice Music for London,” it was conceived by conceptual artist Jim McWilliams in collaboration with Charlotte Moorman. The two often worked together in the 1970s and created several works together, including “Candy (The Ultimate Easter Bunny),” in which Moorman and her cello were covered in chocolate sitting on a bed of green Easter grass; “Sky Kiss,” which suspended Moorman playing her cello in the air by helium balloons, and “Flying Cello,” which rigged Moorman and her cello on two separate trapezes so that she could strike the cello with her bow when the two swung close together. Moormon challenged conventional thinking on arts and culture through her participation in the Fluxus movement in the 1960s, and from 1963-1980, by organizing the New York Avant Garde Festival ground-breaking events featuring experimental music, dance, video art, installations, and site-specific art.

“Ice Cello” will be presented in conjunction with the FluxConcert organized by Miller at 8 p.m. that evening at the Williams Center. A program of Fluxus short performance pieces will be interpreted by Miller, Lafayette students, community participants, and Jeanrenaud, who will also include three of Ono’s Fluxus “scores” in the following evening’s “Metamorphosis” performance. The FluxConcert is the final program in this year’s Fringe Festival. (Those interested in participating in the FluxConcert should call 610-330-5361 or email artgallery@lafayette.edu). Miller conducted FluxConcerts at Lafayette in 1991 and 1995.

Conceived and performed by Jeanrenaud, “Metamorphosis” features compositions, improvisations, and arrangements for acoustic and electric celli. An aural and visual experience, it uses projection, lighting, staging, and multidimensional sound sources. “Metamorphosis” was commissioned in part by the Kahilu Theater in Hawaii, San Francisco’s Yerba Buena Center for the Arts, and the Rockefeller Foundation’s Multi-Arts Production Fund. It premiered at the Walker Art Center in Minneapolis, Minn. in May. A highlight is Jeanrenaud’s rearrangement of a piece composed by Glass (originally for piano) for four celli, which incorporates taped and live performances and the work of five video artists, one for each movement of the piece, creating five distinct visual and aural atmospheres.

Jeanrenaud was born and raised on a small farm outside Memphis, Tennessee. She started playing the cello at age 11 and began studying with Peter Spurbeck the following year. As a teenager, Jeanrenaud — who was the principal cellist of the Memphis Youth Symphony — developed an interest in contemporary music. She continued her studies with Fritz Magg at Indiana University, where she was a founding member of the IU Contemporary Music Ensemble. A highlight of her college years was participation as a Fellow at Tanglewood, where she was principal cellist with the Festival Orchestra conducted by Leonard Bernstein. After earning a bachelor’s degree in music at Indiana University, she lived in Geneva, Switzerland to study with Pierre Fournier.

At age 22, Jeanrenaud joined the Kronos Quartet and relocated to San Francisco, Calif.. For 20 years she worked with hundreds of composers and musicians, including Glass, John Cage, Astor Piazzolla, Morton Feldman, Joan Armatrading, Henryk Gorecki, Steve Reich, Gabriela Ortiz, Sofia Gubaidulina, Foday Muso Suso, David Byrne, and many others. Jeanrenaud performed more than 2,000 concerts throughout the world with the quartet in locations such as the Concertgebouw in Amsterdam, Carnegie Hall, Montreux Jazz Festival, Teatro Colon in Buenos Aires, Moscow Conservatory, Tokyo’s Suntory Hall, Sydney Opera House, Teatro La Scala, Kennedy Center, and London’s Royal Festival Hall. She made more than 30 recordings with Kronos, most of which were released on Nonesuch Records.

Jeanrenaud left Kronos in 1999 to pursue different artistic directions, including solo projects and collaborations with other artists. In March 1999 she performed Kevin Volans’ Cello Concerto with the National Symphony Orchestra of Ireland, marking her first solo appearance with an orchestra in more than 25 years. She has recently appeared at New York’s Lincoln Center Out of Doors Festival, The Kitchen, and Guggenheim Museum, at the South Bank Centre in London, the University of California-Berkeley’s Zellerbach Hall, and many other venues. Several composers have recently written or are currently writing new works for Jeanrenaud. Her most recent recording, Lou Harrison’s Rhymes with Silver, was released in fall 2000 on the New Albion label.

Jeanrenaud is currently exploring many artistic areas, including composition, improvisation, electronics, and multi-disciplinary performance. She frequently collaborates and performs with a diverse group of artists. Jeanrenaud was an Artist-In-Residence at San Francisco’s Yerba Buena Center for the Arts in the 2000-2001 season.

The 2001-2002 Performance Series at Lafayette is supported in part by gifts from Friends of the Williams Center for the Arts; by provisions of the Alan and Wendy Pesky Artist-in-Residence Program, the James Bradley Fund, and the Ed Brunswick Jazz Fund; and by grants from the National Endowment for the Arts, Pennsylvania Council on the Arts, Mid Atlantic Arts Foundation, Pennsylvania Performing Arts on Tour, and New England Foundation for the Arts.

The exhibition series is presented under provisions of the Detwiller Endowment. The gallery is funded in part through a grant from the Pennsylvania Council on the Arts, a state agency funded by the Commonwealth of Pennsylvania and the National Endowment for the Arts, a federal agency.